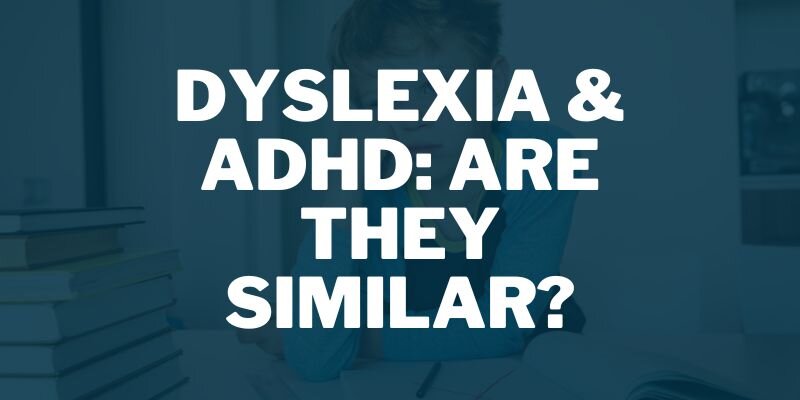 Dyslexia And ADHD: Are They Similar?

Attention Deficit Hyperactivity Disorder (ADHD) and Dyslexia are neurological conditions that make learning more difficult in children. At times, the symptoms of both these conditions can be hard to distinguish as both cause trouble with writing and reading. Flash cards can be used to aid these children to learn easily and remember things visually.

Almost three in ten have dyslexia along with ADHD. If a person has dyslexia, it doesn’t cause ADHD and vice versa.

These neurological conditions share some common traits, even though both are merely different from each other.

Both dyslexia, as well as ADHD, can be passed down from families. Almost more than half the number of people with ADHD have a family member who has the condition. This applies to dyslexia with a 30% possibility.

The physical and chemical features of the brains of people with dyslexia and ADHD are identically different when compared to others, who are free of these conditions. For instance, the chemicals in the brain which are known as neurotransmitters do not function consistently in an individual with ADHD. Similarly, the brain appears slightly to be in a different structure and less active in some cases. In the case of dyslexia, the left hemisphere of the brain shows less activity which affects the person’s language and speech.

Even though both these brain conditions are interdependent, certain things can trigger the chances of having dyslexia or ADHD, or even both.

The symptoms may differ from person to person as no two people with dyslexia or ADHD show similar symptoms, but the conditions can show up in similar ways.

The difficulty in reading can be a symptom of both conditions, but it might look different for each condition. The dyslexic person might not be able to sound out the words on a page or misread the words, while ADHD will degrade the reading speed but the words are read accurately. Instead, ADHD conditions make people lose their place on the page where they were reading and skip over punctuations and endings due to a lack of attention or concentration. Concentration exercises for students with ADHD can be provided to improve their concentration.

It is very hard to read, spell, organize, proofread and use grammar correctly for a person with dyslexia. As ADHD people are hyperactive, they find it challenging to organize their thoughts and spot errors in writing. People who have both conditions face great difficulty in writing neatly.

People with dyslexia have trouble recalling places and people’s names, mix up words that are very much alike and mispronounce them. ADHD people are way more forgetful in day-to-day life activities, like misplacing the keys or missing important appointments. Memory improvement techniques such as maintaining checklists, practicing working memory skills, and so on are very helpful to improve life quality.

Even though it is often seen that ADHD and dyslexia are similar, they are quite different in certain aspects. Hence, figuring out between them can significantly help you in adapting suitable ways. Sugar uses effective personalized ways to improve the quality of learning and obtain the required skills.